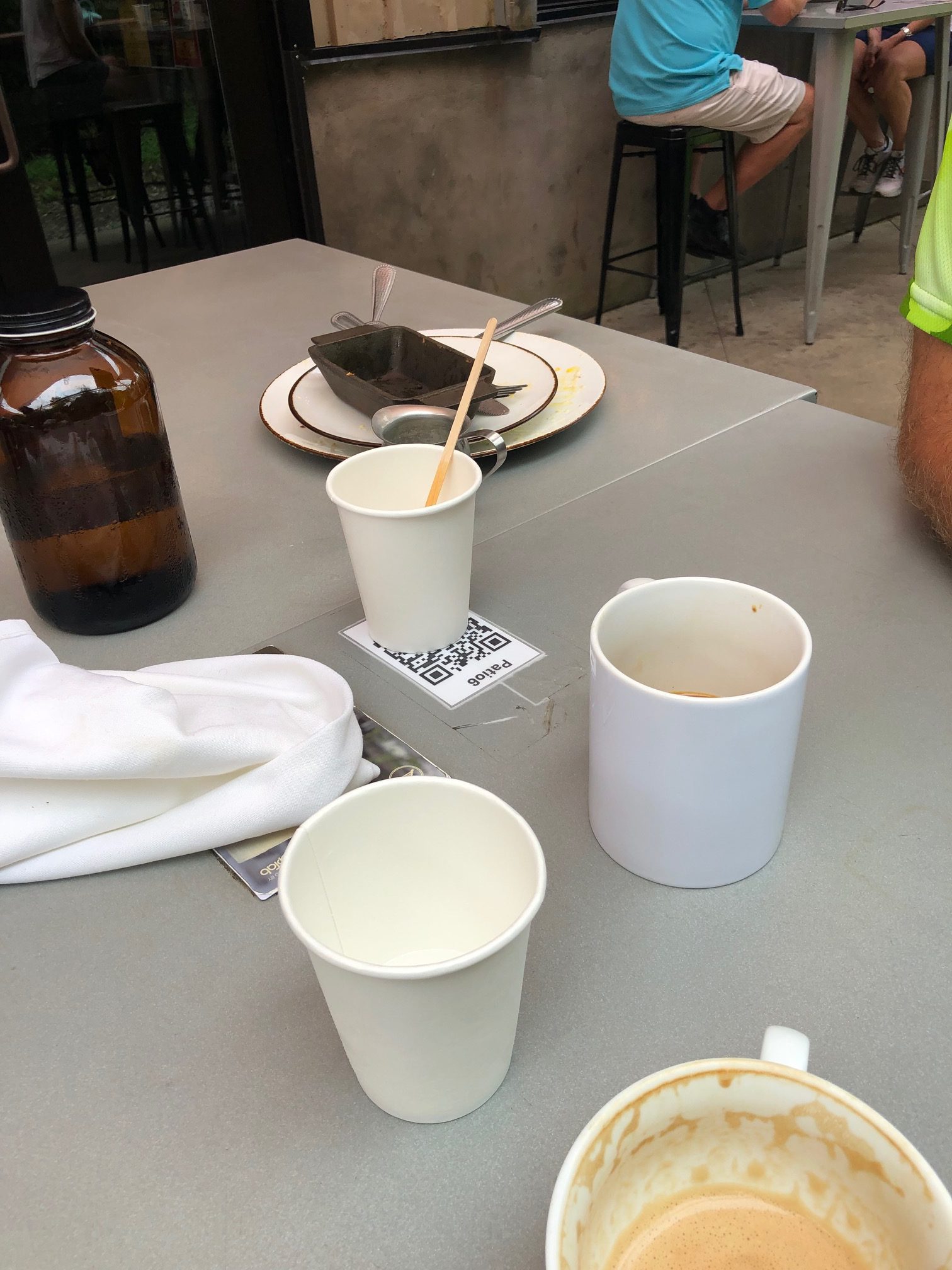 This morning, Hubby and I went for a bike ride around a ritzy suburb, which is hilly and wooded and full of massive homes with massive yards and little homes with massive yards. Some of the monstrosities sport faux Greek fountains, Ionic columns, and circular towers. Many are gated. We stopped for breakfast at a brewery along the trail, which is a proper little gold mine for the all the bicycle traffic they get. Clean plates all around.

Later we went to some estate sales and picked up a few things to furnish the basement. Hubby is always on the lookout for flannel bed sheets, which he turns into rags for his work truck. We got a stack. Also among the finds were matching bedside lamps, a hallway rug (Persian style), and a blanket rack.

This afternoon, I had a very odd phone call from a friend who accused me of “lashing out” at her “numerous times” and said I had accused her of not supporting me in various aspects of my life. On the one hand this came out of left field; I have never engaged in this behavior with any of my friends (not since I was 13, anyway). On the other hand, she has always been an odd duck, so somewhat not surprising. For that reason I’ve always treaded lightly around her but never stopped hanging out with her. The funny thing is, I’ve seen her exactly twice since January 2019. In March, I ran into her while out walking, and we stopped to have coffee and catch up. She had just bought my second book, and I thanked her for her support. The other time was June in the grocery store parking lot. She was getting into her car and jumped on the phone, brushing me off when I stood outside her car waving and saying, “Hey, let’s get together for a physically distanced walk soon.”

A while back, in the Before Times, she called me one night to ask whether I was okay and to say that I “wasn’t behaving like” myself. It was another strange call. When I asked for an example, she couldn’t give me one. All she said was, “You just haven’t been you, lately.” Which was also funny because we’ve never hung out more than once every couple of months. Today, I also asked for examples of when I had allegedly “lashed out.” She told me she didn’t want to “get into it,” which I took for “I don’t have any examples because it never happened.” Either she’s gaslighting me or she’s mentally ill. I fear it’s the latter, based on what she’s told me about her family history. It could also be that she’s dreadfully lonely and this is a cry for help. Probably is a cry for help, either way, but I can’t answer this one; not when I can’t trust her to be honest with me and not when she falsely accuses of me bad behavior. She asked me to think about it and decide whether I still want to be friends with her. I got the impression she expected an apology if not a groveling. What she got was a brief lecture on being prepared to back up her accusations with examples and an “I completely disagree that I’ve behaved that way. I’m sorry you think so, and that it’s come to this, but I wish you well. Please get help.” I also told her she was delusional, which may not have been the most appropriate thing to say. But it was said without malice or anger.

It’s left me a little shaken and sad because I like her, despite everything. I’m drawn to those whom society tends to label as “misfits.” I like people who are different, even if I find them challenging. But when a person turns on me, forget it. So how do I be present when a friend is so obviously troubled and lashing out at me? Maybe some friendships have a shelf life and this one has run its course.