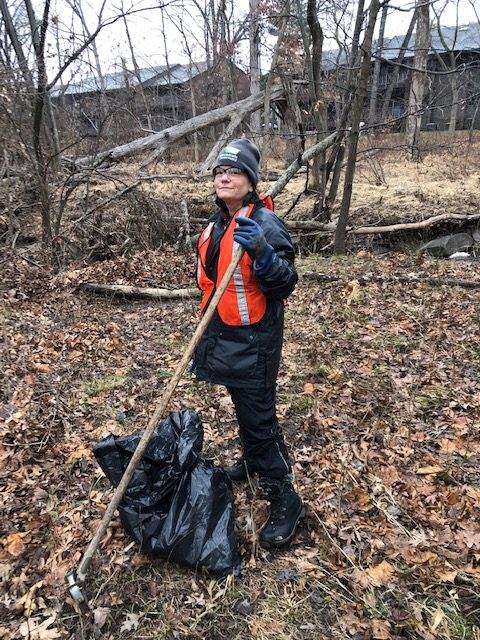 “Wanna pick up trash?” This was the question Hubby awoke me with this morning. Those of you who know me know this isn’t such an unusual question to ask. And those of you who’ve been reading my blog for several years may recall my early forays into picking up trash—and how a kid-ditching plan backfired on me. My answer to this question may have been “no” had I known that freezing rain was in the offing today. But since it didn’t start to rain frozen droplets until after we parked our car and walked in about a quarter mile to our starting point, I said “yes.”

Hubby has been spending some of his time off work this winter picking up trash along long stretches of our local W&OD Trail, huge garbage bagsful of trash. Avid trail users, both of us hate seeing litter—anywhere. We agreed to go a long an offshoot trail to the W&OD, Sugarland Run. I wanted to pick up trash in the creek, while Hubby focused on an area six feet in from each side of the trail. My first job out of college was as a water quality specialist for the US Forest Service, so pristine streams are a particular passion. I had to do a little bushwhacking to get to the stream from the trail.

My crowning find was about a 20-foot-long strip of weed fabric, which I rolled up and schlepped out of the stream to the path to pick up later (my weight training for the day). I also found a pair of child’s mittens and wondered about the child playing by the streams edge—assuming they were left there and not washed downstream. Did her parents teach her about taking care of streams? Interest her in a passing fish?

Doing physical labor, especially in the freezing rain and other types of unpleasant weather, makes one contemplate interesting things. For example, should I have left the wool hat I found in the stream in case the fish need to keep warm?

In the end, the two of us filled four giant bags of plastic and glass bottles, aluminum cans, plastic cups, straws, Styrofoam, a book of matches (when was the last time you saw one of those?), a snoose can (chewing tobacco, which is common where I come from in MT but not so much in northern VA), wrappers of all kinds, aluminum and paper food trays, frozen snot-infused tissues, medical masks (inevitable), and lots and lots of plastic bags, including lots of dog poo bags (some used, most not). We dumped two bags into a trash can near the YMCA and left two more sitting by a doggie doo station for the town to pick up.

I have concluded that plastic bags and straws to be the scourge of all Mankind’s inventions (after guns and bombs).