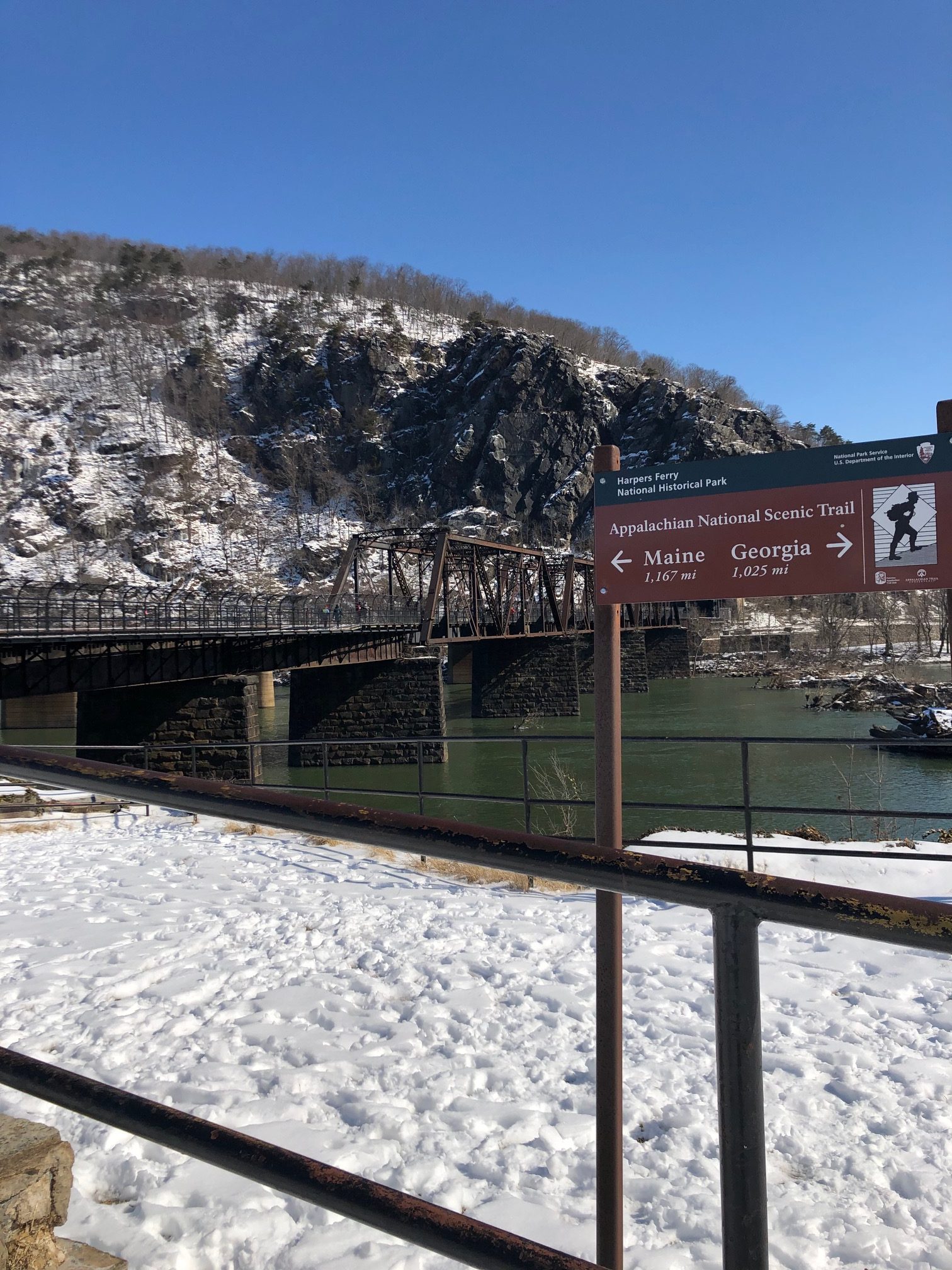 Today we headed to one of our favorite regional spots, Harpers Ferry, WV, for a walk along the Shenandoah River. Lots to take pictures of today: icicles dripping off the rock faces, kayakers braving the fast-flowing Shenandoah River, a long train carrying coal ripped from the mountains up north. One of the things I like about Harpers Ferry is it’s considered the starting point for the Lewis & Clark Expedition, plenty of landmarks of which are throughout my Montana home. It’s the starting point because this is where they received many of their supplies—mainly weapons.

We walked along the pedestrian section of railroad bridge, across the river, to the C&O Canal Trail (Washington, DC, to Cumberland, MD). It’s a favorite place to bike, too, and it won’t be long before the snow melts for that. Some day we intend to ride from Pittsburgh (on the GAP Trail) to the C&O and into DC, about 310 miles total.

On the bridge couples have been attaching love locks on the fence, an obnoxious tradition, allegedly started in Serbia during WWI, of putting padlocks along the bridge to proclaim their love. They throw the keys into the river. Please, people, don’t do this. The locks eventually interfere with structures through corrosion and worse, not to mention, they’re an eyesore. If you want to proclaim your love, donate to a local charity instead.

After a stroll along the canal towpath, we headed back to Harpers Ferry and walked up the long hill from the river to the village, (where people actually live, not the National Park of Harpers Ferry along the river). Just after Christmas we had wandered into the village (which turns into Bolivar, WV, at some point) on a cold, blustery day. We hadn’t been there in a long time and had discovered the sublime Hamilton’s Tavern. Today, we visited again for lunch; although cold, the sun warmed the front patio, warming it enough to eat outside. Deviled eggs and mushroom bisque for me; breakfast skillet for Hubby, after having had four eggs already this morning. Yes, because I know you’re wondering: house-made chocolate cake and lemon cheesecake. (So much for the pledge to wean myself off sugar.) This place is a hidden gem.

On the walk to the tavern we came across a tree wrapped in scarves outside a little building owned by the General Federation of Women’s Clubs. Apparently, they are an international women’s organization dedicated to community improvement by enhancing the lives of others through volunteer service, as their website proclaims. Hubby asked whether I’d like to wrap our oak trees in the front yard with scarves. No, but these did look a little better than love locks—and they’re more easily removed. We’ll have to come back in summer to see what this tree will be wearing.