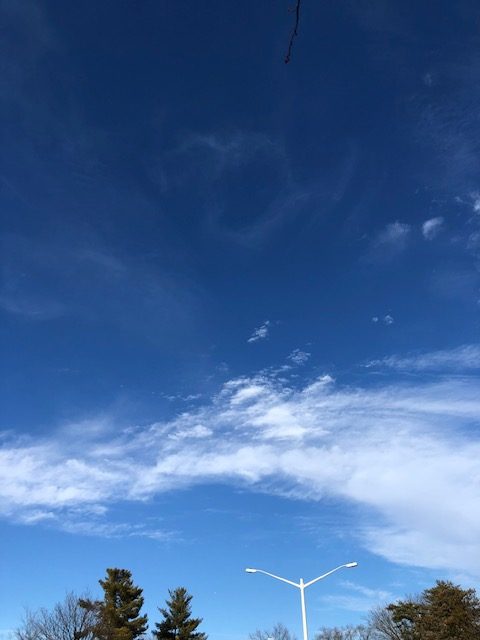 In the past few weeks we’ve been seeing more airplanes than we had for most of 2020. We live near Dulles Airport, so in typical years we get a lot of air traffic. One of a handful of good things about 2020 has been the lack of planes, making for much improved air quality, especially during the hot and humid summer. Other creatures were in the skies today, too. Vultures circling the woods where I walk swooped down to feed on what a dead deer. A half dozen were feasting while another half dozen were waiting their turn in the trees above.

We checked inside the greenhouse today. Looks like my geraniums didn’t survive the cold (should have put in the basement instead). But other things, including the parsley, are ready to come out from under the fleece.

Today was Day 2 of Mom Turns 90. She received more flowers, cards, and a big cake (from her church), which she’ll have to eat alone because the staff probably aren’t allowed to share it with her. We organized another Zoom party, this time with friends of hers from church. Mom was 35 minutes late for her own party because she decided to eat supper in the dining room of her building instead of in her room. We enjoyed more pictures of Mom over the decades, from baby onward. One of my sisters showed a short video clip of Mom doing a backflip on a trampoline when she was 79 years old (she was attached to bungee cords), to great delight of everyone watching. This old gal is the bestest!