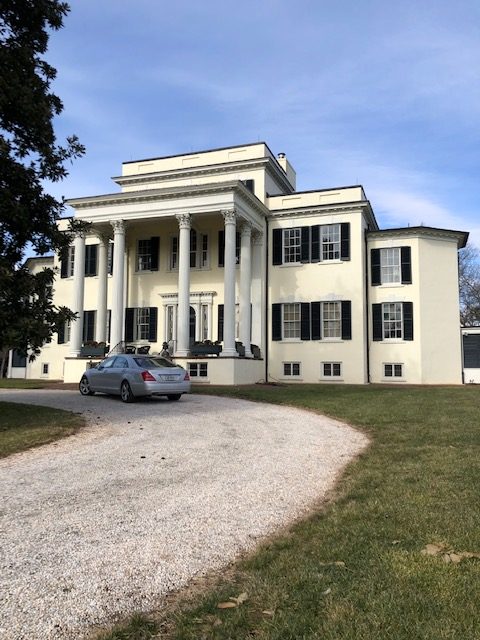 We haven’t been to the Oatlands estate in a few years, another place where we enjoy exploring the formal gardens. The gardens are smallish but mostly well kept. The box hedges have grown into small trees. Keeping boxwood properly trimmed—and disease-free—is an art, expensive, and you have to stay on top of it. Not a priority for many stately homes that fell into periods of disrepair.

Oatlands dates to 1798 when one lucky SOB, George Carter, inherited a little over 3,400 acres. The Carters are considered one of Virginia’s “First Families.” Of course, much of the work that took place to build the house, grounds, and gardens was done by enslaved people. There’s project at various historical sites around the Commonwealth to remember the names of the enslaved, to tell their stories, because they were denied this right as enslaved folk. At one time Oatlands was home to 133 enslaved men, women, and children. These projects are important and we’re seeing more and more of this recognition on our travels. It’s not enough but it’s a start.

One of the ponds was covered in a sheath of ice, another smaller water feature still had a half-dozen goldfish. Thinking of summer? One of my favorite buildings is the greenhouse. In near ruin the first time we visited 20 years ago, it’s slowly been beautifully rehabilitated and now used as a small venue for different types of gatherings (in non-pandemic years). I’d love to have a dinner party there. The estate is also home to a beautiful collection of massive trees: oaks, beeches, and the biggest osage orange I’ve ever seen (no picture). It looks as if a strong wind could easily topple it. One of my favorite features here is a pair of Japanese maples just outside the greenhouse. More than a hundred years old, when in leaf they form a little fort you can crawl into.

On the way home we stopped at Whole Foods for groceries. My Amazon Prime app wasn’t working on my phone, which meant I wouldn’t be able to take advantage of the reduced Prime prices. I made a stink about it to the cashier, telling him the only reason I was buying so much was because it was on sale for Prime members. He called a manager over, who told the cashier to just give us the meat for free—$84 worth it turned out to be! “Now I feel bad for complaining,” I told the cashier. It made me even more keenly aware of my status as a white person of privilege and means. I’m going to increase my regular donation to the local food bank.