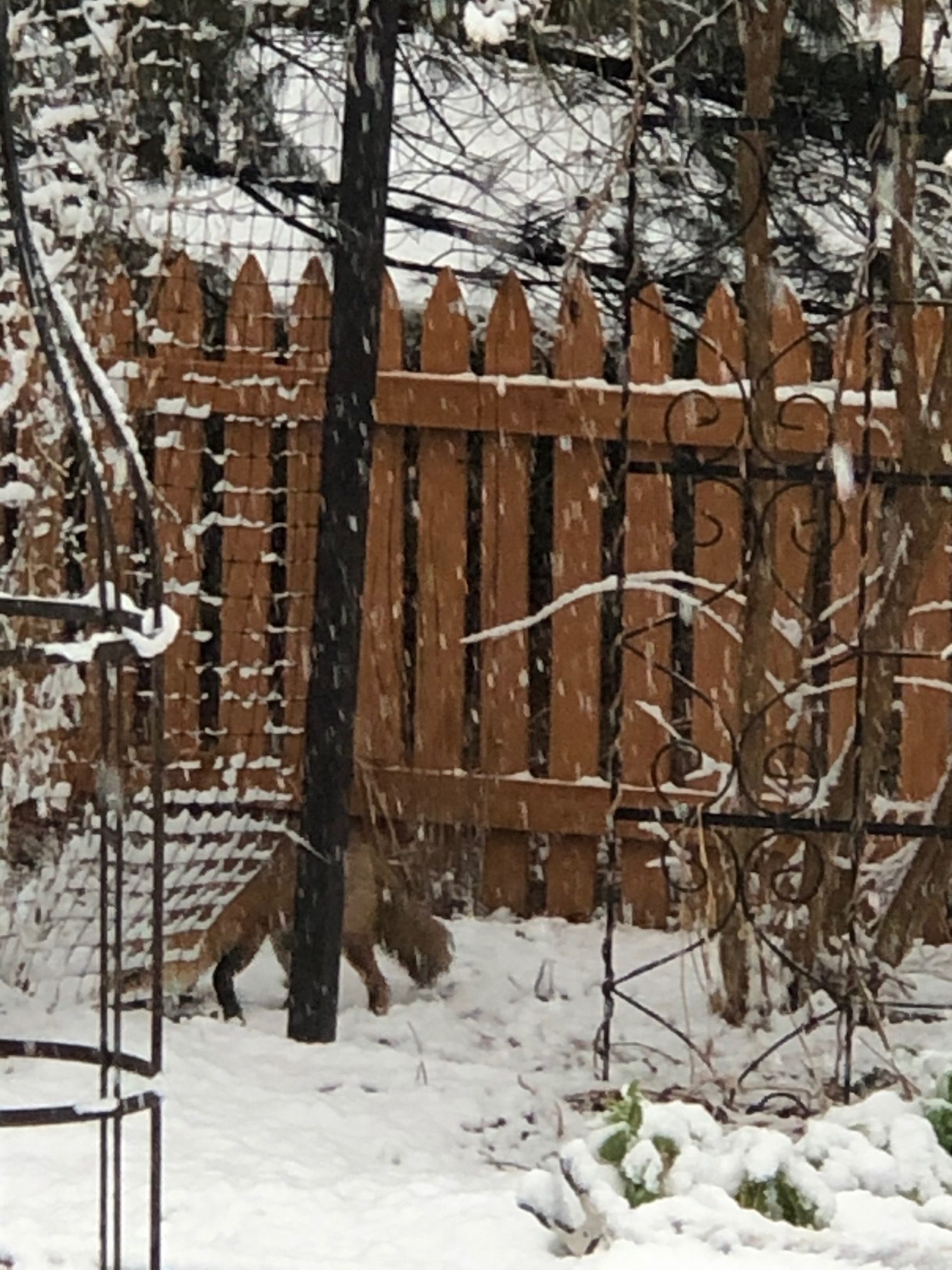 This morning our foxy friend was playing with a squirrel in our back yard. It was dead (I assumed he killed it), and the fox was pushing it around like a cat would with a dead mouse—wanting it to move so she keep chasing it. We watched her play with the dead squirrel for several minutes as a gentle snow fell. I actually don’t know whether the fox is male or female, and whether it’s one of the same ones my mom had named a few years ago, but this one passes through our yard multiple times a day. I’m going to assume it’s a female and call her Madison. I suppose I could use my past skills as a wildlife biologist to figure it out. (Apologies for the crappy photo; just when I thought to grab the phone to take a picture, Madison partially obscured herself behind the pergola.

Sunday mornings in winter are usually reserved for food prep. On today’s menu were three loaves of almond bread (1 for a friend), yogurt, another batch of turkey chili, and almond milk. I also made of batch of gluten-free chocolate chip cookies. Careful readers will remember my pledge from yesterday to wean myself off sugar. The problem is that as soon as I publicly declare such a pledge, my brain tells me I need more of whatever it is I’m trying to cut back on. So this same friend who received my almond bread also got half of the cookies.

A work colleague of mine recommended this acupressure mat, which she swears has cured all her ills and makes her “sleep like the dead.” Judging by the 5-star reviews on Amazon, it should put a lot of medical professionals out of business too. Purportedly, every known ailment to humankind can be treated by 30 minutes a day of lying on your back on this “bed of nails” (the for real nickname of this product). All the walking I’ve been doing since the pandemic—not to mention years of sports in earlier years—has left me with a cranky hip and annoyed knees. All the years of sitting at a computer hasn’t done any favors for my back, neck, and shoulders either. I’m one giant bag of knotted muscles. The torture device arrived yesterday, and already I’ve spent a total of 50 minutes lying on it, bare back. After the first 20 minutes, I nearly fell asleep. My back looked like it had been attacked with a meat cleaver. After the initial agony, it felt great! I even got Hubby to give it a try. Stay tuned for medical updates.