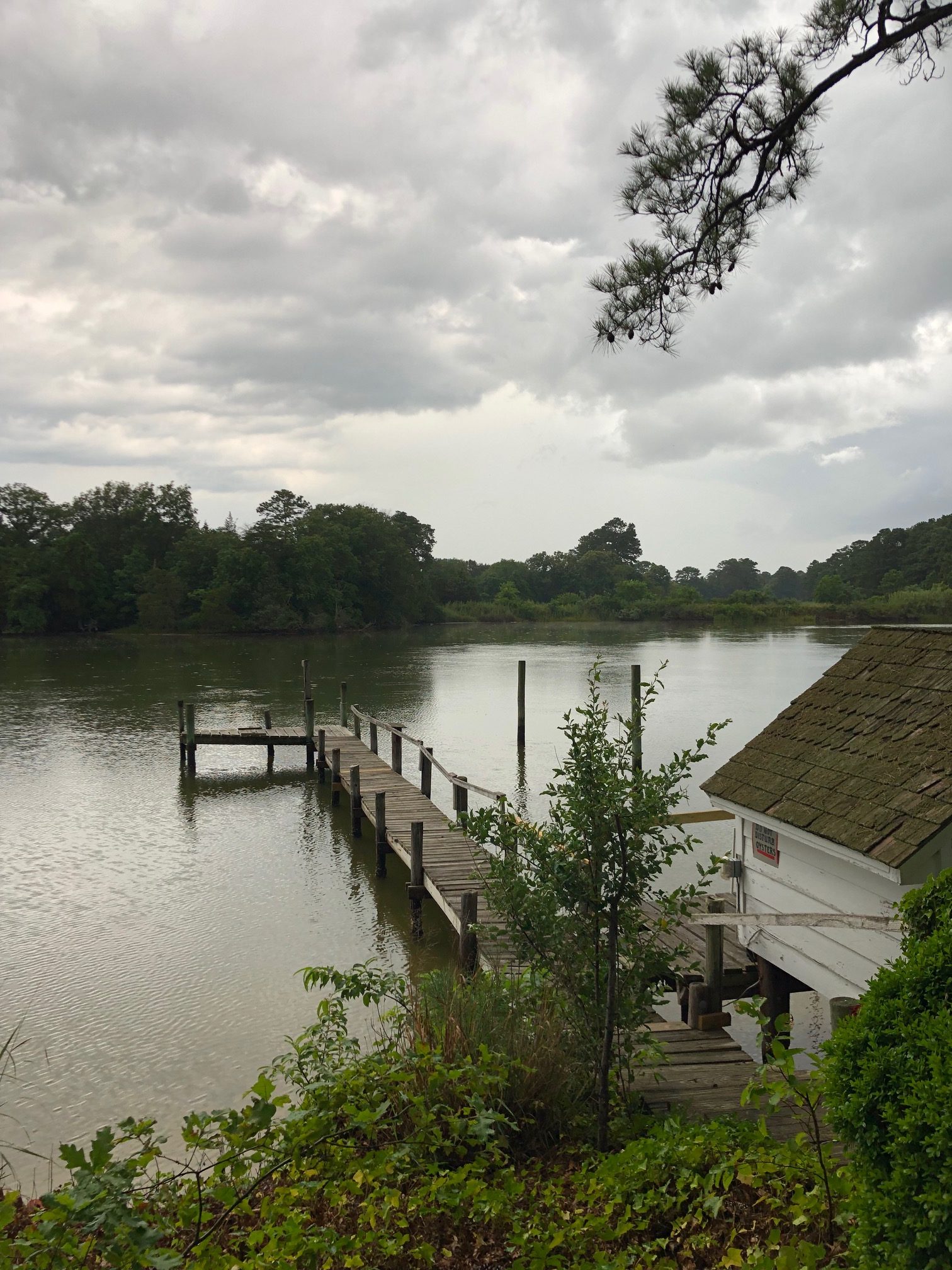 Pinch, punch, first of the month. I lost to my UK friend but got Hubby this morning. Small victories; easily entertained.

We left this morning for our vacation on Virginia’s Eastern Shore. We’re holing up outside the little village of Onancock in a house with a private dock on Cedar Creek. There’s an egret rookery across the water, and we were watching them fly in and out late this afternoon. As I write this, the rain is lashing down in spurts, the lightening is flashing, and the thunder is rumbling. Rather than putting a damper on the first night of our hols, it soothes the soul, sitting in the glass room watching Mother Nature from a dry place. I’m reminded of many family vacations or time away with just me and the folks at various friends’ lake cabins, many times while watching the rain come down. We played a lot of card games during those times.

On the drive here we stopped for lunch in Annapolis, a favorite place of ours, and had crab cakes and french fries while sitting on the wharf. The ducks got to eat my bun, despite my telling Hubby that processed white bread isn’t any better for ducks than it is for humans. I guess their lifespans are short enough that they won’t develop diabetes or other health issues as a result of tourists getting a kick out of feeding them.

The drive across the Bay Bridge is always spectacular, if not a little freaky, especially when thoughts of failing infrastructure dominate the news these days. The Eastern Shore is beautiful along the water, although most of the property appears to be private, apart from some spectacular wildlife refuges along the bay and ocean sides. So the drive down the center of this peninsula can be a little boring without water views—and flat, flat, flat. We look forward to exploring for the next five days.

Today is International Chicken Wing Day, and while driving to our rental house, we passed several massive chicken farms and processing plants owned by Perdue and Tysons. We passed a semi loaded with caged chickens, all crammed in without any space to move; some looked dead, and the heat was unbearable. I was so struck by the sadness and cruelty of it, that I couldn’t take a picture.

I learned that a good friend of my parents died on Monday. Jan had only just lost her husband about a month or so ago. The couples had been close friends for many years, and our family was quite fond of Jan and Bob. She was also one of my biggest fans, having loved my memoir and my blog posts about self-care. She would reply to those emailed posts with some thoughts of her own and a thank-you for sharing. I reckon she was ready to go, having been in physical pain and enduring health issues for a long time. Then when the love of her life dies, well, that’s pretty much when you re-assess your time on this planet and your quality of life. I’ll call Mamacita tomorrow. Every day is one day closer to when she, too, will move on, and although I’m doing my best to prepare for that day, I know it’s going to be hard. The same thing happened when Dad died. It was expected given his health, but still, it hits you in the gut.

I thought of him this morning while waiting at the pharmacy for a prescription before leaving town. The store radio was playing Bruce Hornsby’s “The Way It Is,” which took me back to the last years I lived at home with Mom and Dad, the last kid to leave the nest. Funnily enough, when that song was released, I was already in college but nevertheless it reminded me of those two years of being an only child in a house we had moved into just before my junior year of high school back in northern Illinois. Occasionally, whenever I’m in a store that’s playing a song from the early 1980s, it takes me back, not to high school per se, but to memories of my parents during that time. They were younger then than I am now, and I wonder what it was like preparing to be empty nesters and dealing with their “baby.” I was so ready to leave the nest, sometimes enjoying being the only child for once and sometimes wishing I didn’t have to hang out with my parents so much. They bravely and gracefully navigated my moodiness. If Dad were here now with us at this little house in the backwoods of the Eastern Shore, he’d be out on that dock with a fishing pole. And so I will go to bed with that vision of him on the water, contemplating whatever it was he used to think about during those quiet times, deeply feeling into his contentment in those moments.