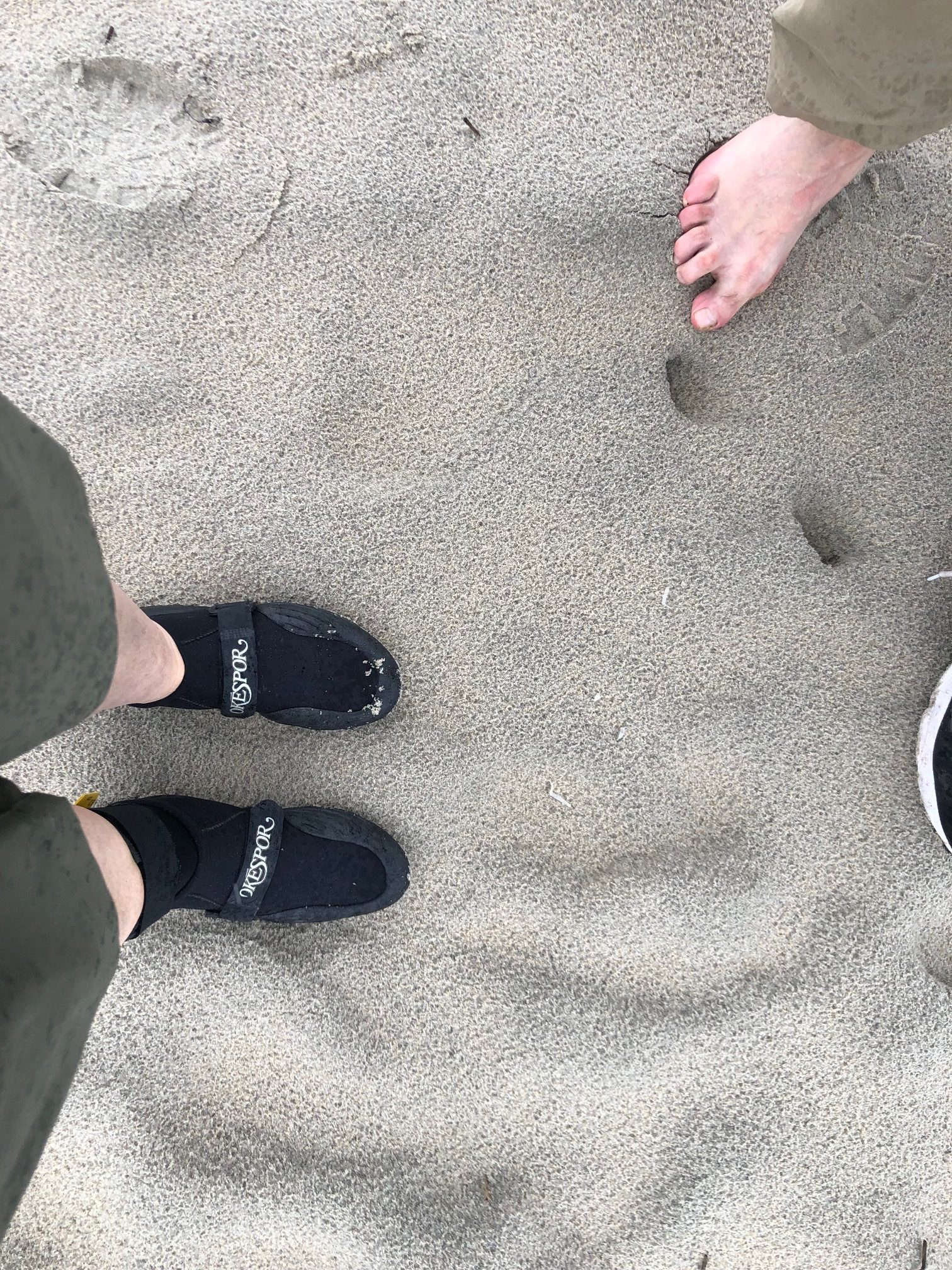 It bucketed down all night long, and Mr. Sensitive to the Noise of a Fly Fart had trouble sleeping because of the rain pounding on the roof all night. His flipping and flopping in bed meant I had trouble sleeping. When we stirred around 5 AM or so, we remembered we were on vacation and slept in until 7. It was still raining lightly, but that didn’t stop Hubby from squeezing into a wet suit he hasn’t worn for at least 10 years and going for a swim in the inlet, probably a half-mile there and back. A little while later his arms were itchy. We thought it might have been a cryptosporidium of some sort in the water—lots of chicken farm waste around here making its way into the waterways, as well as parasites from waterfowl and wading birds. But this evening I saw a small jellyfish off the dock, which they call “sea nettles” in this part of the country, so it could have been that. (Also been seeing the first fireflies of the season!)

After a hearty breakfast of bacon, eggs, and fried onions and peppers from the garden, we headed up to Chincoteague National Wildlife Refuge along the Atlantic coast. Sighted some wild ponies, checked out the visitor center, and Hubby had a splash in the rough surf while I watched from the beach and got my toes wet. The water was warmer than expected; the rain still coming down. This part of the coast is critical nesting habitat for endangered piping plovers. We didn’t see any but the refuge rangers do put large cages around their nests to protect them from predators and humans. We stopped at a little museum in the village of Chincoteague, and there was Misty, the pony made famous in the book “Misty of Chincoteague,” by Marguerite Henry (and one my favorite children’s books when I was growing up). They had taxidermied her—Misty, not Marguerite—along with one of her filly foals, Stormy. The pair are the star attractions of the little museum. A tweeny girl standing next to me said to her little brother, “It’s so life-like.” It wasn’t clear whether she understood it was, uh, more or less the real thing.

It’s World UFO Day, and on our drive to the refuge we went through Wallops Island, which is a NASA site for small rocket launches, Virginia’s space coast. It was still raining when we returned to our little house. We took a nap and when we woke, the sun had finally poked through the clouds. We drove into Onancock to have a stroll around; not many shops were open but we did buy some pricey cheese, sausage, smoked salmon, olives, and crackers at a sheeshee wine market for our supper. We drove down to the wharf and saw the ferry (which is really a just a boat with two outboards) arriving back from Tangier Island. We had planned on taking the ferry there today, but because of the rain opted not to. We had been seeing colored arrows painted on the roads at various intersections, which are the tell-tale signs of an organized bike ride. Later we researched on the internet to discover they had had a fundraiser bike ride in June. We decided to follow the arrows to see whether the ride was worth doing (just about any ride is in our opinion), choosing to follow the green arrows because we figured that one was probably the 30- to 40-mile route (we were right; 35 miles). So, we’re going to ride that route on Sunday. No need for cue sheets now that we know it’s well marked. We saw lots of wild turkey cobs strutting around the soybean fields (got a far-off picture of one of them). Plenty of deer were also making a meal of the soybean greens.

Learned today that my aunt’s second husband died this afternoon. Another death for Mamacita to have to think about.

This evening I sat on the dock for a little while and watched the water while the sun went down over the trees across the inlet. Red sky at night, vacationers delight.