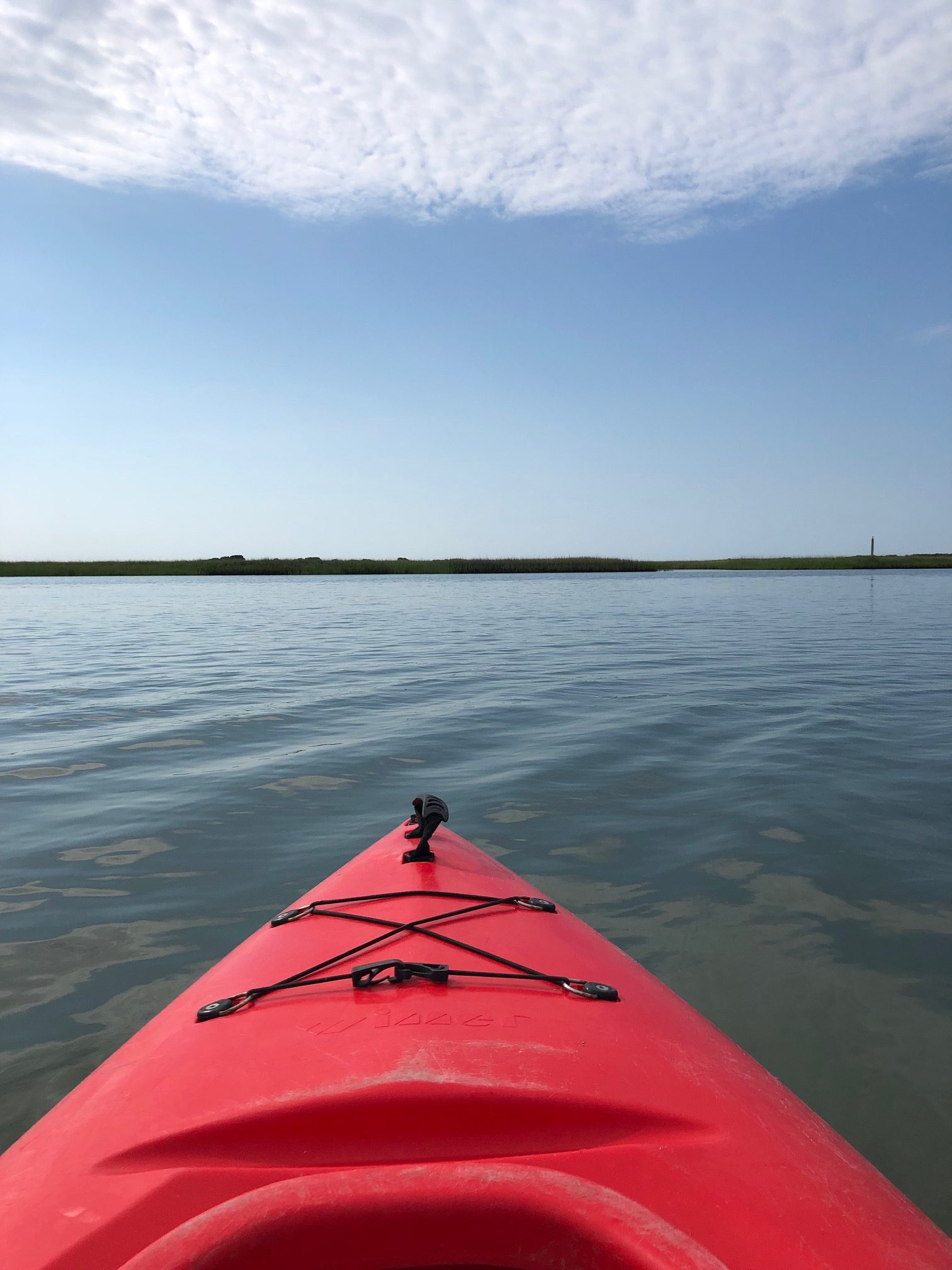 Today is National Bikini Day, and although I would no longer be caught dead in one, I did wear my long boys swim shorts and a swimmy-type top all day in hopes of being able to swim in the Atlantic. We started out early with a long drive to the Eastern Shore of Virginia National Wildlife Refuge for a guided kayak trip. As the tide receded, revealing fiddler crab burrows in the mud banks, we made our way through the channels, surrounded by sea grass, to the Virginia Inland Passage and across to Raccoon Island for a short walk and talk about birds and shellfish. Of course crabs, oysters, clams, and scallops are big around here, as in multi-millions of dollars just in the Virginia part of the Chesapeake. I learned that fiddler crabs have one giant white claw because apparently female fiddler crabs find that attractive. I also learned that there are WWII-era bunkers on the barrier islands in the area to fend off German U boats, and finally that there’s a bill in the state legislature to rename the Virginia Inland Passage after Harriet Tubman because she used the waterway as part of her underground railroad.

After the kayak trip, we headed across the Bay Bridge and Tunnel to Virginia Beach, and more specifically to Back Bay National Wildlife Refuge to ride bikes and get that Atlantic Ocean swim in. It was a long, hot drive there, and when we arrived, we learned that swimming isn’t allowed in the refuge part of the beach. Too bad, because we experienced the refuge beaches when we were here last September, and they are spectacular. Our only other choice was to go to a public beach and pay through the nose to park and swim with hundreds of other people. We opted for a bike ride along the gravel road into the refuge (which we also did last fall). We only went about four miles before turning around. The sun was brutal, biting flies were attacking Hubby’s bare back (he left his shirt back at the car), and we were tired. Technically, you can ride all the way into North Carolina, which is only about 12 miles or so. In the fall we got within about 4 miles from the border before turning around because the sand on the road got too deep for our bike tires. You need fatties for that section. Lots of people have fatties, and they load their bikes down and tow bike trailers to go in and camp along the secluded beaches.

When we got back to the car, we noticed that our bike rack was bent; someone must have backed into it pretty hard because part of the bracket had pulled away from where it attaches to a cross bar. Concerned that our bikes might fall off on the drive home, we headed for a bike shop in Virginia Beach. Thank you Joe at Trek Bikes for straightening as best he could the rack and also tightening the bolt that attaches to the tow hitch. He thought we could make it back home without having to buy a new rack. If someone hadn’t backed into it, it’s possible that wind shear, coupled with the weight of my two-ton bike, bent the rack. We’ll never know, but here’s hoping $5Gs’ worth of bikes don’t fall off on the interstate tomorrow on the drive home and set off a chain reaction of car wrecks.

Last night, we wandered up the road at dusk to watch the fireworks being shot off across the inlet in town. One of the McMansions down the road from us was having a huge party with loud music, and the other neighbors were setting off noise makers. We went to bed with the sound of America’s birthday.

This evening is definitely quieter. The next door neighbors went home and the others are quiet. We went for a bike ride, about 12 miles or so, down all the country lanes near us, most of them dead-ending at the water, either the bay or an inlet. I’ve never seen so many abandoned houses and trailer homes and dilapidated other places that look like people live there. The desperately poor live next door to million-dollar properties.