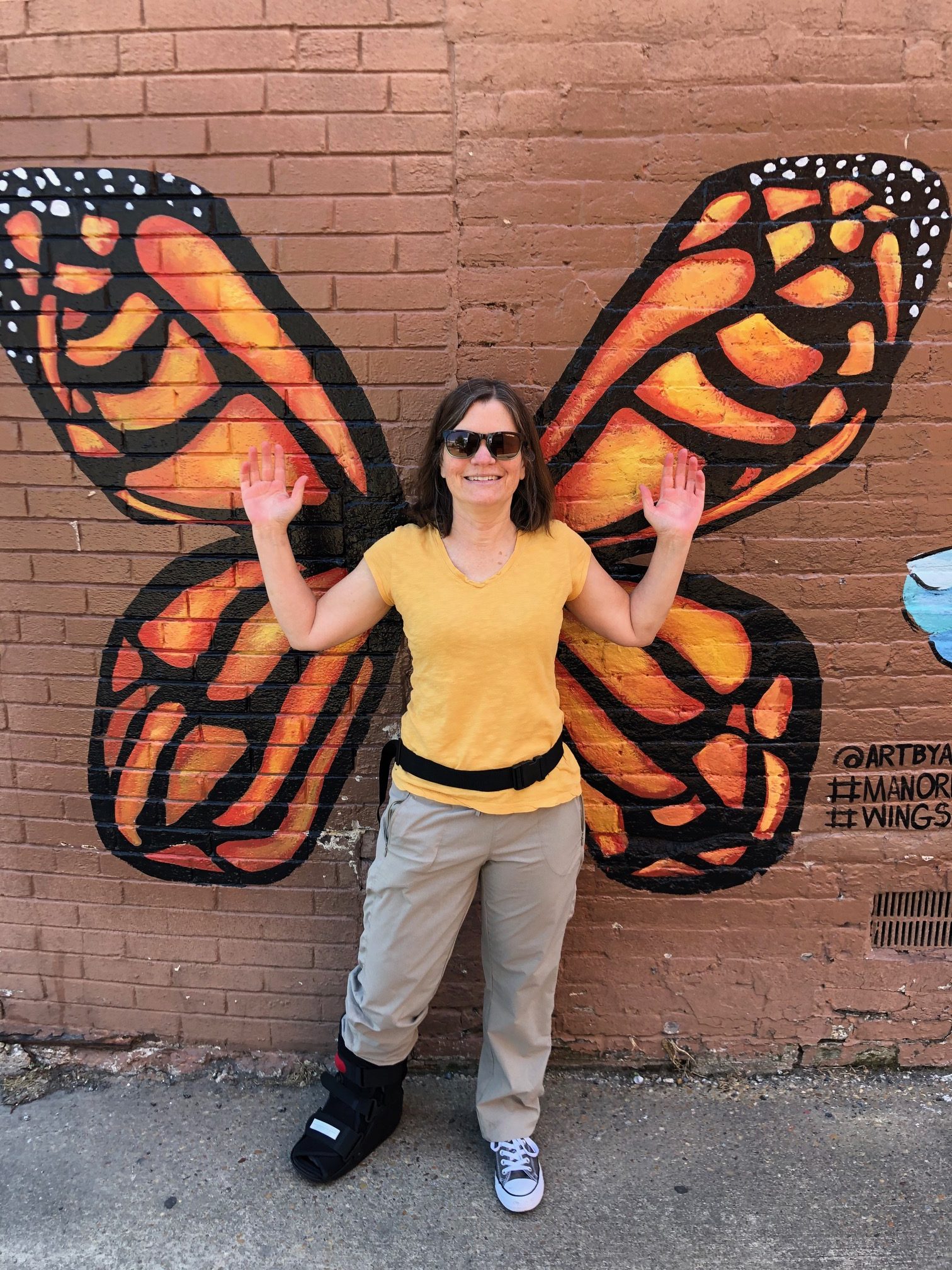 We didn’t want to be at the house today because there was more construction going on (pouring the concrete steps to the basement and clearing the bank to prepare for the driveway extension. The guys managed to break the Cox cable, which was bound to happen, but it least it happened on a Saturday when I wasn’t home working. On a beautiful sunny spring Saturday we’d normally go off for a 6-mile hike—or a 40-mile bike ride—then come back and work in the yard. But because both of us have sore feet (me from my sprained ankle, him from getting plantar warts burned off yesterday), we opted for a long drive into the Shenandoah valley. We stopped in Front Royal for a little stroll through town. Hubby wanted to prove to me that FR wasn’t the non-thrilling, nothing-to-see-or-do place I seem to recall the last several times we blew through. And he was right. I guess we never really saw the little historic downtown. So I humbly apologize to any FRians for undervaluing your town. We stopped in an old-timey mercantile, where I bought a new pair of Minnetonka moccasins. The insides of my current pair, which I bought at Wall Drug in 2014, are wearing out. It was a completely self-indulgent purchase to pamper my feet, especially the left one that’s been doing a lot more of its fair share to keep me mobile at the moment. We found a park bench and called Hubby’s daughter in Scotland, as promised. She’s been accepted in the timber-frame building school sponsored by the Prince’s Foundation (as in the Prince of Wales, Charles) in Scotland, which teach her the trade (she’s already been doing this for a while), in addition to conservation work on ancient buildings and some business skills, all while paying her a stipend and putting her up in Dumfries House and feeding her. There are 12 people on the course. She starts in July and finishes in February. (We want to know if they need chaperones.) Couldn’t be more proud of her.

Next on our adventure today was a stop for lunch in Luray then a beautiful drive through a part of Shenandoah National Park to Sperryville, where we stopped for gelato. We happened upon two car accidents today; the first was cleared up by the time we passed by but the second one had only just happened. As we slowly dodged the cars, people were helping a screaming woman out of the car, whose airbags had deployed. Enough people were already at the scene, so we carried on, driving a little more cautiously and saying a prayer for those involved. Our door, thankfully, was enjoyable, and we can never get enough of the Shenandoah and Blue Ridge Mountains. We realize how lucky we are to live here.

When we got home, the concrete finishers were still here, waiting for it to set up so they could do the finish work. As I type this at 7:30, they are still here. Our yard is looking more and more dusty, the dreaded grass flattened and path-worn. Neither of care much about the grass but the dust is starting to get to me. I’ll need to buckle up, though, because starting at the end of July, it’s going to get a whole lot worse when they start on the basement and master bath.