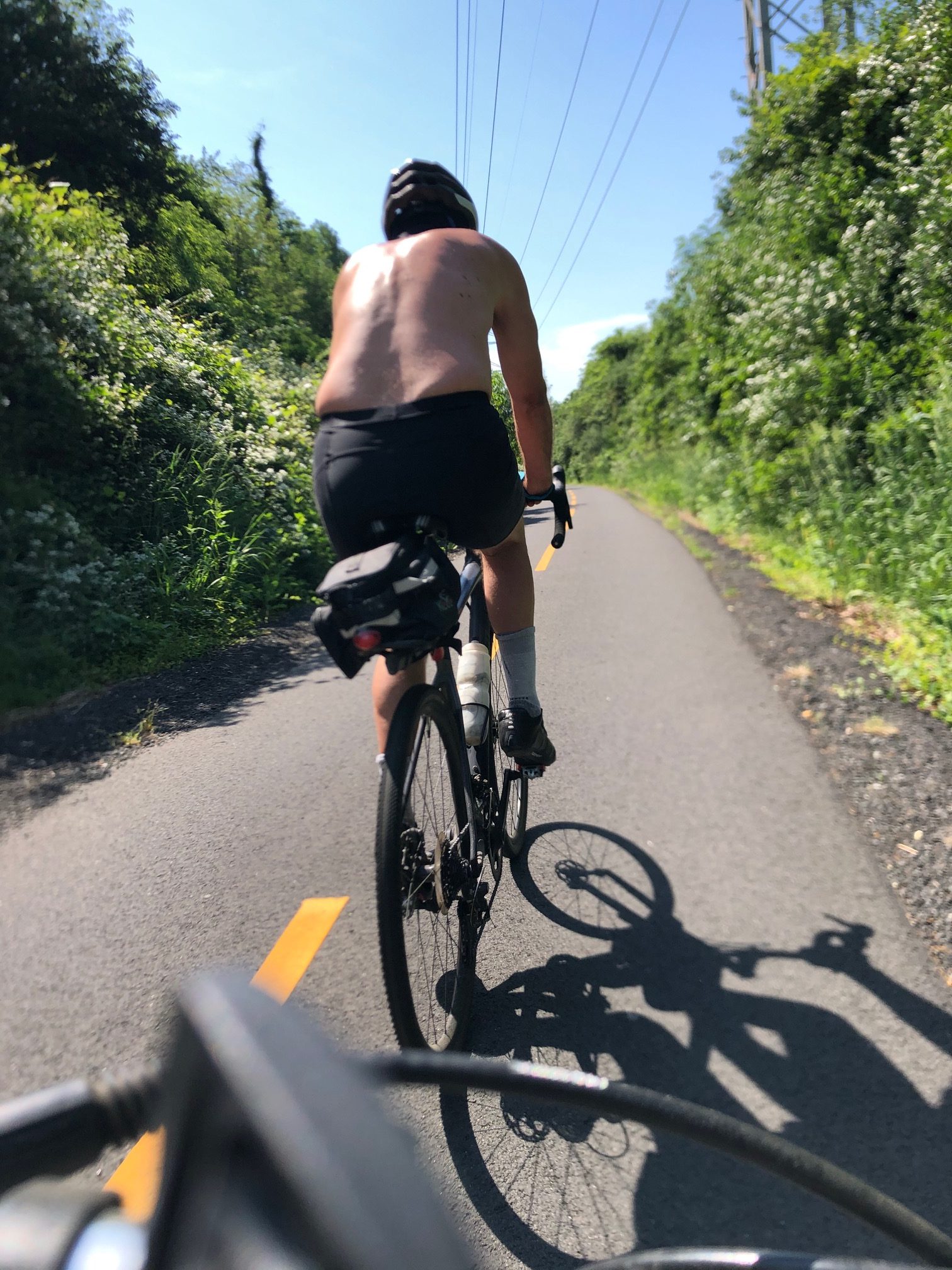 Hubby and I rode our bikes to Leesburg this morning to eat breakfast at a place we hadn’t been to before. In the Before Times we were always on the lookout for a good breakfast spot, and preferably one we could ride our bikes to. Hubby’s biggest challenge—eating out anywhere—is that he prefers food piping hot. In Britain this is achievable; any decent place cooks food to order, so no making the bacon in advance and putting it under the heat lamp. In America, the heat lamp is like part of the cooking process. In Britain, food is served so hot, I have to let it sit for several minutes before being able to eat it. Hubby’s asbestos mouth allows him to eat it right away, savoring the temperature while somehow managing not to burn his tongue.

So in the Before Times we used to frequent a place called Eggspecations of a Sunday morn. The one we rode to wasn’t able to sustain Covid. But now the town of Leesburg, about 15 miles west of us, is becoming a shishi place, evidenced by all the coffee bars, microbreweries, and upmarket cafes, including decent breakfast places (still waiting for out little town to sprout one). Now that we’re heading toward the After Times, and feeling better about eating out (and literally outside still), we’re discovering these new restaurants. Today we ate at a place called Shoe’s Cup and Cork, so named they found a shoe in the wall during renovations with a claim tag from 1928 for $1; guess no one bothered to claim it back then and the shoemaker was stiffed for a buck.

We got an early start on our bikes because wanted to beat the heat; today’s high hit the low 90s. Lots of other people had the same idea, so the trail was crowded. We saw a couple of snakes and two box turtles (it’s World Turtle Day) along the way. Yes, the food was good and we’re looking forward to trying out the rest of the pandemic surviving restaurants over the coming summer.

The foot is healing nicely, although I may pay for it tonight after spending a couple of hours on it on the concrete floor in the basement, vacuuming all the dirt, concrete dust, and wood shavings left behind from the guys who cut out the windows and doors. While I tidied, Hubby spent the rest of the day in his garden, building a rockery and planting out more vegetables. The few times I ventured outside after the bike-to-breakfast adventure, I couldn’t hear for the cicadas. I wish I had a decibel meter to measure it. The birds are going nuts on the feast, and we saw our foxy friend making a pass through the yard, head down, tongue out, lapping up all that buggy goodness, which she probably took back to the down to throw up for her kits. Doesn’t get any better than that. Who needs to ride a roundtrip of 25+ miles for breakfast when it’s crawling up the trees in your own back yard?