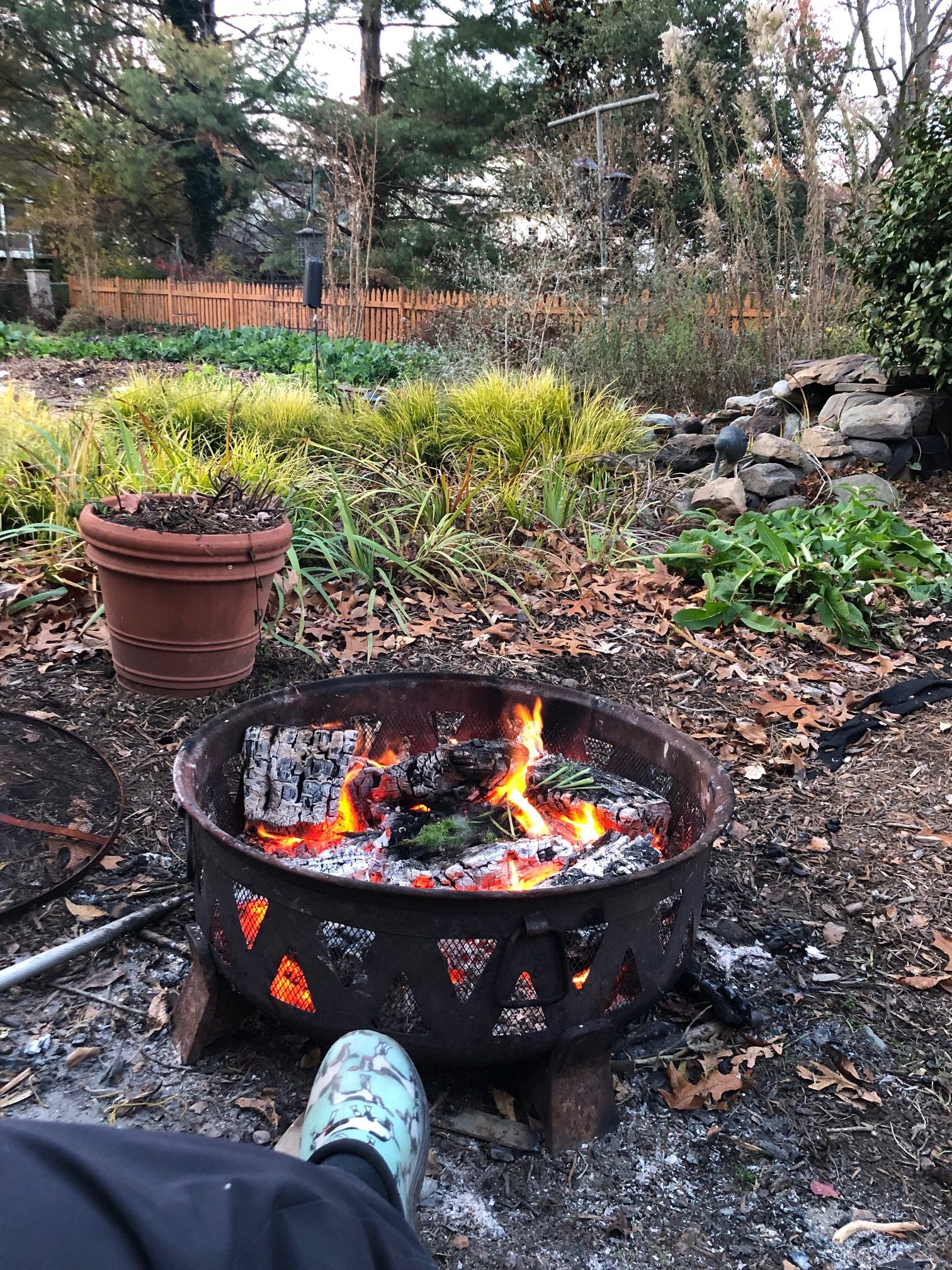 Thanksgiving Day, and my stepson’s 25th birthday. When I first met little Sammy, he was still in diapers. Now he has his own apartment and a new job he seems to like. We tried calling him but he’s not keen on answering his phone. Hoping to see him in 2022 since it’s been more than two years since we last saw him.

I went for a walk this morning; the temps were perfect. Later, Hubby and I went for another short walk around the town of Vienna (interesting studded guitars in a shop window) before meeting my sister and bro-in-law for a Thanksgiving meal at a steak house. They had steak; we had a very large plate of turkey, half of which we took home, along with our desserts (cheesecake with lemon curd and carrot cake with caramel sauce). Afterward, I rode my bike to the cemetery for another walk. Many people were visiting gravesites of loved ones, probably the most people I’ve seen there ever.

Hubby built a large fire in the brazier out back, and we sat around relating memories of our individual various camping, backpacking, and adventure stories. One of his was about coming to America for the first time around the age of 20 and traveling from New Hampshire to Florida. One night he planned to spend in an ocean-side park along Biscayne Bay. He was flying to El Salvador the next day and didn’t want to spend money on a hotel bed for the night. Unfortunately, the park was so full of drunks and drug addicts at night, he went into a public bathroom and locked himself in a stall, where he slept, and then walked to the airport the next morning. (This guy is a tough one.) One of my memories was about going backpacking with one of my besties for her birthday in August. This was Montana, and of course it was sleeting when we arrived at the trailhead. But we persisted anyway. Her boyfriend, who raised hawks—and also pigeons to feed them—sent us on our way from his house with one of his homing pigeons in a box. He instructed us to release it when we got to the trailhead with a note taped to its leg that said which trailhead we decided to park at. It wasn’t so much that he wanted to know where to start looking if we failed to come home in four days; it was to see whether his pigeon was able to find its way back. It did. (And I presume it also ended up, eventually, on a hawk’s dinner plate.)

Today we are both grateful that we don’t have to sleep in bathroom stalls or hike for miles in the sleet, and that we can enjoy turkey, not pigeon, at the table. We are grateful for family and friends, for jobs and health. It is also not lost on us that what we have today, our lifestyle and comforts, were borne on the backs of slavery as well as the genocide of native peoples of North America. That does not make us happy, and I’m wondering how to reconcile this.