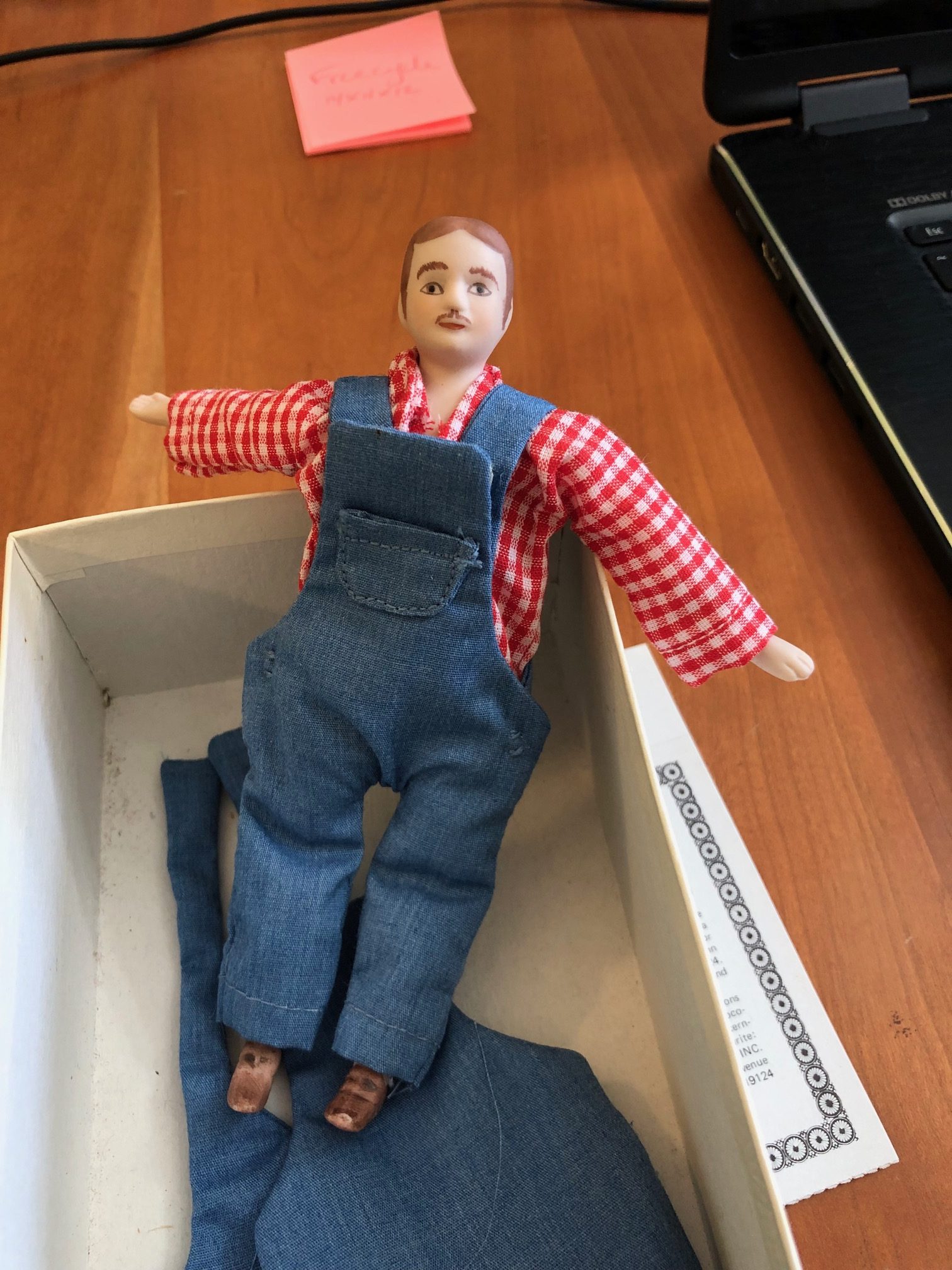 I spent about 5 hours today taking pictures of unwanted items and putting them on Craigslist, mostly to give away but a few things for sale. Half a dozen things went within an hour of posting, but there are still grocery bags full of stuff to shift. I don’t want to donate them to charity shops because they’re overwhelmed with stuff and they’d probably throw away what I have to offer. In addition to that, I braved opening 4 boxes of things I got from my Dad. Most of it was model train bits and bobs, tracks, miniature houses and people and cows and sheep; N scale and Z scale engines and train cars, and wires and switches and whatnot. I took pictures of everything but am going to leave it for another day to figure out how much it’s all worth before I put it for sale. In the boxes I also found some kits for miniature houses and a farmer doll that he made, likely to go with one of his miniature dioramas. Farmer Jim is now sitting on my shelf next a picture of Mamacita in her wedding dress.

This afternoon I rode 30 miles on my bike on an errand to deliver some of my books to woman who is carrying them in her new bookshop. It was a stupendous day for a bike ride. Saw a fawn, spots fading, along the trail. She didn’t seem bothered by passers flying by. Hubby stayed behind and cleared up the garden, picking the last of the tomatoes.

Twenty years ago on this day I was working for World Wildlife Fund in Washington, D.C. When one of my colleagues shouted out in the office that a plane flew into the World Trade Center, we rushed over to see what she was on about. It wasn’t long before that horrible day started to unfold, all of us in a daze. And then the Pentagon, which was only a few miles from where I worked. WWF set up a large screen TV in one of the large conference rooms. By that time, a lot of people had already left to go home or to pick up their kids from school or daycare. I left the building a few hours later, walking over to Georgetown to meet my brother-in-law at his office for a ride home. Frantic people rushed across the streets, walking quite deliberately to wherever they were headed. Clouds of black smoke billowed into the sky from the direction of the Pentagon. The road home, normally packed, was as empty as you’d find it on an early Sunday morning, not an early Tuesday afternoon. For the rest of the day and into the evening, I sat glued to the TV with my sister and her family, watching the same videos of the tragedies over and over again. Trying to make sense of what happened and fearing for what could happen next. Hubby had been in America for only a couple of months, but he was a few hours away at a stonemason’s conference for the week.

I remember thinking how much I had been looking forward to the new millennium, to the new enlightenment, to a better world—and then feeling thrown onto the rocks. Sometimes it feels like I’m still trying to pick myself off, with all the divisiveness and war and climate disasters and countless other unpleasantries. Not to go all maudlin, but we have a long, long way to go to the new enlightenment. I’m not giving up hope.