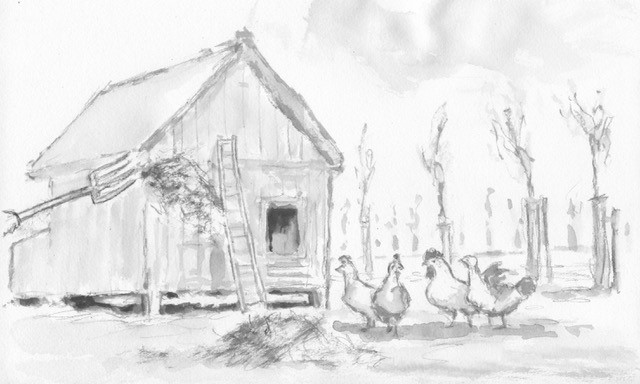 Enjoy this sneak peek of my latest book, The Value of Your Soul: Rumi Verse for Life’s Annoying Moments.

When you volunteer to plant trees but end up mucking out chicken coops.

Inside each of us there’s a continual autumn. Our leaves fall and are blown out over the water. [. . .]  Very little grows on jagged rock. Be ground. Be crumbled, so wildflowers will come up where you are. You’ve been stony for too many years. Try something different. Surrender.

When my desperately bored-with-life soul first reached out to Braemar from my home in Montana to offer my services in exchange for room and board, they invited me to come plant trees (see the Introduction). My initial contact was through a man named William, the manager of the estate grounds. What I didn’t know was that eleven thousand trees had already been planted that previous April. Braemar intended to plant the remaining six thousand trees the following April. So when I arrived in September ready to plant trees, William told me the project was another six months away.

“What am I supposed to do in the meantime?” I asked him.

The response was something along the lines of, “Oh, there’s plenty. You can bake bread, chop firewood, clean toilets, or do whatever needs doing. That’s how it works here.”

At that same time I also learned that William would soon be returning home to Australia, so Braemar would have a new estate manager. The new guy, Trevor, would be sort of like my boss, since he was going to be in charge of all the grounds-keeping and forestry work. Apparently, they had assumed I would take the role of the Trevor’s assistant. It took me a few minutes to recover from the initial shock, after which I learned what the role would entail. Braemar had small livestock to look after, firewood to harvest, a vegetable garden to revive from the dead, fences to mend, and all manner of miscellaneous “whatever needs doing.” The position didn’t excuse me from any potential toilet cleaning, however, because Braemar was truly a pitch-in place, although staff members—all volunteers—mostly stuck to their assigned roles. The toilet-cleaning of animals, though, was front and center.

I could have chosen to leave—and return home with my tail between my legs after having announced to God and country that I was moving to Scotland and not to be surprised if I ended up there for the rest of my life. Or I could stay and muck out chicken coops. I chose the muck. To my surprise, that choice transformed my life in ways I never dreamed (although not without first subjecting me to a lot of personal turmoil). I tried something different. I surrendered.

Ooh, surrender! That word used to stick in my craw because I interpreted it as giving up or giving in. However, I’m slowly making peace with surrender, which I now see more as giving up trying to control situations. It’s also about accepting new opportunities when they present themselves because sometimes plans change. Typically, most people aren’t fans of change. We like knowing what to expect. We find comfort in routine and certainty. Even if we don’t like the routine we’re stuck in, at least it’s familiar. We don’t like being taken off guard because we don’t like surprises, unless it’s a lottery win. If change and the unexpected scare you, buckle up because the only certain thing in life is change. One day we’re going to our favorite restaurant or visiting friends or vacationing on the beach, and the next we’re on global lockdown because of a deadly pandemic.

Try looking at it this way: Sometimes you’re given what you need, not what you think you want. Change can improve your life or situation, lead to better health, deeper relationships, even fun! I reluctantly accepted my altered invitation at Braemar and in doing so learned a lot about myself, others, the world, and my place in it. I had to wade through lots of crap, chicken and otherwise, and that was entirely the point. It got me to a better place in myself. I learned to surrender to opportunities, even if they weren’t part of the plan. I learned to accept that change happens, and how I respond to it makes all the difference to the outcome. Acceptance uses a lot less emotional energy and often results in much grander outcomes than I had imagined—even if it’s a series of smaller changes that ultimately lead to something larger.

Rumi talks about the continual autumn in us, our fallen leaves blown out across the water. In other words, life is constantly changing; something is always dying away to make room for the new. Without change, we can’t have spring wildflowers or new forests. Being willing to be fertile ground means being open to change. You never know, it could lead to amazing transformation.